Pav Bhaji…and my first entry to a (or two) blog event(s)! 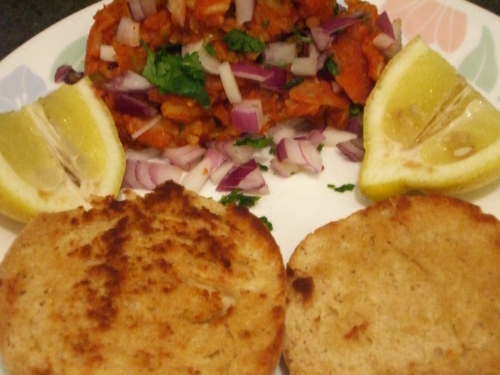 Remember the time a few weeks back when I felt that I had never ever been as busy as I was then…Well, I was wrong and not just a little wrong, but way off. Not only have I been busier, I have been going completely crazy with everything going on around me! Hence, the ignorance of the blog for a little while.

Anyway, since I have been following blog events for a little while, I figured it was about time for me to take the leap and submit an entry too. Hence, here goes, my first entry to a blog event and why not make it double trouble by sending this to 2 events?

The idea of making Pav Bhaji originated a few weeks back, when I read this post on Mallika’s blog. Additionally, I saw the note on Monsoon Spice, about Street Food being the theme for this month’s Monthly Blog Patrol. Well, does it not seem like destiny conspiring to ensure that I make some Pav Bhaji? 🙂

Of course, having grown up eating Pav Bhaji, it was not something new to me. It just wasn’t something I’d made in a while.  My usual recipe for Pav Bhaji was taken off the back of the Everest Pav Bhaji masala pack, just like my usual sambar recipe. However, I also remembered that the last time I made Pav Bhaji and bought Pav from the Indian store, it came with mold growing on the inside. Ugh! absolutely disgusting! Luckily, I also recalled seeing a recipe for making your own pav (and that too, a whole wheat version!) on Jugalbandi a while back. Thankfully, unlike my plans for making Asha’s Masala Potato bread, these plans actually materialized.

The recipe I followed for the bhaji is Nupur’s recipe from One Hot Stove. It is an excellent recipe (and an excellent blog!) and was very tasty, although I made a few modifications for our taste buds. Here’s my version.

2. Also, boil the potatoes on the stove with enough water to cover, until they are soft.

3. Heat the oil in a saucepan and add the ginger and garlic. Saute for a couple of seconds and then add the bell pepper.

4. Once this softens a bit, add the pav bhaji masala, salt, tomato puree, peas and the cooked vegetables.

5. Now, bring in the strong men or call the hubby dearest to start mashing and mixing with a potato masher.

6. Once mashed, simmer for about 10 minutes and serve with a pat of butter, finely chopped red onions, chopped cilantro and lemon wedges.

Some of the main differences between Nupur’s version and mine are that I added about 2-3 tbsp of the Pav Bhaji masala powder, rather than 1 tbsp. This might just be because my spices are older and not as fresh (although I do freeze them, but just don’t use them as much). Also, I had half a small bag  of baby carrots lying around, which I put into the bhaji, giving it a slightly sweeter taste. Finally, I also cooked the cauliflower and carrots in the microwave.

This is my entry for Monthly Blog Patrol – Street Food hosted by Sia of Monsoon Spice.

As for the double trouble I mentioned earlier, this is also my entry for the new event, Eat Healthy – Fiber Rich started by Sangeeth. After all, anything with that many veggies in it has to have a lot of fiber. 🙂

Additionally, I made my own fresh Pav from scratch, using this recipe from Jugalbandi, which I sliced in half and sauteed in butter before serving with the Bhaji. Surprise, surprise..I really did follow this recipe to the tee! 🙂 And I’m glad I did, because it was absolutely delicious.

Here are some pictures of the final product. 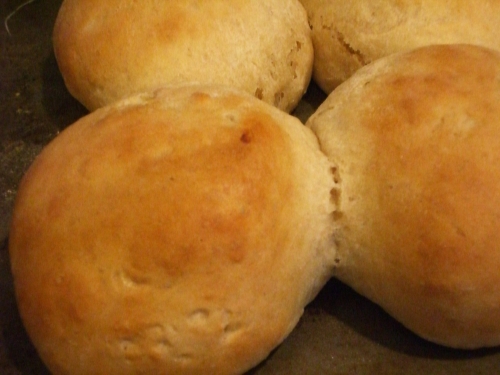 This entry was posted in Baking, Vegetarian. Bookmark the permalink.